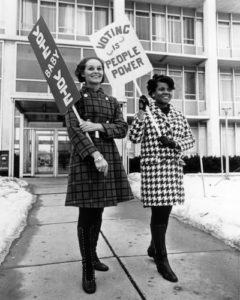 Since 1920 we have been an activist, grassroots organization whose leaders believed that voters should play a critical role in democracy. Our Palm Beach County Chapter was created in 1975.

The League of Women Voters was founded by Carrie Chapman Catt in 1920 during the convention of the National American Woman Suffrage Association. The convention was held just six months before the 19th amendment to the U.S. Constitution was ratified, giving women the right to vote after a 72-year struggle.

The League began as a “mighty political experiment” designed to help 20 million women carry out their new responsibilities as voters. It encouraged them to use their new power to participate in shaping public policy. From the beginning, the League has been an activist, grassroots organization whose leaders believed that citizens should play a critical role in advocacy. It was then, and is now, a nonpartisan organization. League founders believed that maintaining a nonpartisan stance would protect the fledgling organization from becoming mired in the party politics of the day. However, League members were encouraged to be political themselves, by educating citizens about, and lobbying for, government and social reform legislation.

This holds true today. The League is proud to be nonpartisan, neither supporting nor opposing candidates or political parties at any level of government, but always working on vital issues of concern to members and the public. The League has a long, rich history, that continues with each passing year. 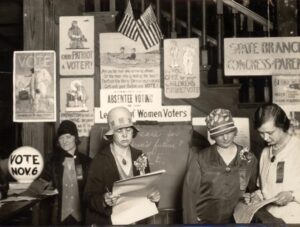 The League of Women Voters was founded in Chicago just six months before the 19th amendment was ratified and women got the vote. Maud Wood Park was elected as the first president of the League. The League quickly began to spread throughout the nation and by 1924 there were National Leagues organized in 346 of 433 congressional districts. The League quickly got involved with influencing policy and began advocating support for the Cable Act for Independent Citizenship of married women which became law in 1922. The League also sponsored their first “Get Out the Vote” campaign.

The depression of the 1930’s and the onset of World War II brought far-reaching change to the League. Membership fell from 100,000 in 1924 to 44,000 in 1934. The National League’s budget was cut in half, necessitating a major reduction in staff and services to Leagues. Perhaps the most important change was that because of gas rationing, League members started meeting in small groups in their neighborhoods to discuss fundamental issues. These issues included the threat to democracy itself and the importance of the informed individual to the success of democracy. 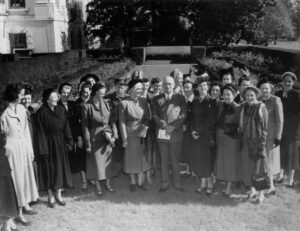 The League of Women Voters was invited by President Harry Truman to serve as a consultant to the U.S. delegation at the United Nations Charter Conference in 1945. The League expressed support for the UN, the World Bank and the International Monetary Fund. To this day, the League has continued its presence at the United National through its one official and two alternate observers.

In 1951, “The National Voter” magazine was first published. Delegates to the 1954 convention voted to group League program into Current Agenda (“CAs”) government issues chosen for sustained attention and concerted action, and Continuing Responsibilities (“CRs”) positions on governmental issues to which the League had given sustained attention and on which it could continue to act. In 1957 the League of Women Voters Education was established to encourage the active and informed participation of citizens in government and to increase understanding of major public policy issues.

The League reached a high point in membership with nearly 157,000 members nationwide. In response to the growing civil rights crisis of the 1960’s, the League directed its energies to build a solid foundation of support for equal access to education and employment. The League also added apportionment to its national program and supported presidential suffrage for the residents of Washington, DC. In 1969, the League was one of the first organizations calling for the United States to normalize relations with China. 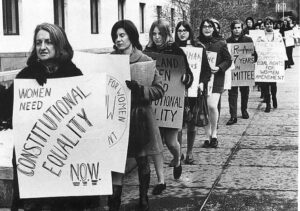 In the early 1970’s, the League addressed the issue of income assistance and began its efforts to achieve a national Equal Rights Amendment, an effort which ultimately failed. The League adopted an official position on the direct popular election of the President, on Congress, on the UN and on Campaign Finance. The League developed broad national positions on water, air, waste management, land use and energy. In 1974 the national bylaws were amended to allow men to become full voting members of the League.

In 1976, the League sponsored the first televised presidential debates since 1960 for which they won an Emmy award for Outstanding Achievement in Broadcast Journalism.

The League was in the forefront of the struggle to pass the Voting Rights Act Amendments of 1982 and contributed significantly to the enactment of the historic Tax Reform Act of 1986. It also adopted a position on fiscal policy and one on US Relations with Developing Countries. In the arms control field, pressure from the League helped achieve Senate ratification of the groundbreaking Intermediate Nuclear Forces Treaty (INF) in 1988. In that same year, the League also completed a study of U.S. agricultural policy, and through the Agenda for Security Projects in 1984, 1986 and 1988, the League underwrote some 150 debates focused on national security issues among congressional candidates.

In 1982, League members called for a long-range plan that would define the League’s mission and outlined goals and strategies for the future. This plan was refined and updated throughout the decade and eventually adopted at the 1988 convention.

The League continued to sponsor Presidential Debates in 1980 and 1984, but withdrew support as a sponsor of General Election debates in 1988.

In 1983, the League adopted a position on public policy on reproductive choice.

In 1990, the League’s grassroots campaign finally secured House passage of the National Voter Registration Act (NVRA), known as “motor-voter.” Leading a national coalition, the League spearheaded a high visibility, multifaceted, grassroots drive that secured House and Senate passage of NVRA in 1992. But, despite League pressure, the President vetoed the bill.

In 1993, the years of concerted effort by the League and other voting rights organizations finally paid off. Both houses of Congress passed voter registration reform legislation. President Clinton signed the National Voter Registration Act in May 1993 and gave one of the pens used to sign the historic legislation to the LWVUS. He saluted the League and other pivotal supporters as “fighters for freedom” in the continuing effort to expand American democracy. The “motor-voter” bill enabled thousands of citizens to apply to register at motor vehicle agencies automatically, as well as by mail and at public and private agencies that service the public.

The League was instrumental in the enactment of the Help America Vote Act of 2002 and the Bipartisan Campaign Finance Reform Act of 2002. The League worked to renew the Voting Rights Act, and filed a number of amicus briefs relating to campaign finance reform issues, racial bias in jury selection and Title IX. Beginning in 2004, the League focused its legislative work under a “Democracy Agenda” umbrella that included redistricting, civil liberties, campaign finance reform, voting rights for District of Columbia residents, election administration reform and ethics and lobbying reform. 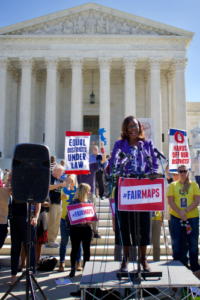 In 2011, the League launched, “Power the Vote,” a campaign opposing measures to restrict access to voting that particularly affected minorities, elderly, students and rural voters and helped bring cases to court. In 2014, the League adopted the study of the Structures of Democracy to review Money in Politics, Redistricting, and the Constitutional Amendment process.

In October 2017, the Supreme Court heard oral arguments in the case of Gill v. Whitford, a case that could change the way redistricting happens across the country. The League filed an amicus brief in this case arguing that partisan gerrymandering violates the First Amendment and the Equal Protection Clause of the US Constitution.

There is no other national volunteer organization in America that inspires such a great degree of commitment from its members. As a direct result of that commitment, the League of Women Voters has evolved from what it was in 1920, a mighty political experiment designed to help 20 million enfranchised women carry out their new responsibilities, to what it is today: a unique, nonpartisan organization that is a recognized force in molding political leaders, shaping public policy and promoting informed citizen participation at all levels of government.