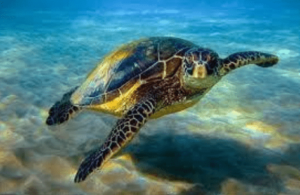 On June 16, we recognized World Sea Turtle Day, a day to honor and focus on the importance of sea turtles. Florida is home to five species: green, loggerhead, hawksbill, leatherback, and Kemp’s ridley (the smallest & rarest). The threats that sea turtles face in the ocean and on land, has decreased sea turtle populations. As a result, every single species has been classified as threatened, “endangered” or critically endangered. Although they are born on land, they have navigated our waterways since the age of the dinosaurs. They have been nesting on beaches for millions of years. But now, sea turtles are in need of human protection. Even with laws in place to protect them, these amazing creatures are under constant threat. From the time their eggs are laid on hot sands to when they swim out into polluted waters, they are in continual danger. With global warming, water pollution and our throwaway plastic lifestyle, the sea turtle’s survival is severely threatened.

Sea turtles perform many tasks that contribute to the well-being of sea life and the environment. Leatherbacks and hawksbills help keep the population of jellyfish and sponges in check. Green sea turtles eat seagrass, which provides a place for breeding and development for many species of fish.

The FAU Research Lab at Gumbo Limbo Turtle Rehab Center in Boca Raton is studying the effects of rising temperatures caused by climate change on the sea turtle population. The nesting period is between March and October. The sex of a turtle is determined by the climate during incubation – warmer temperatures produce more females and cooler temperatures produce more males. With Florida’s high temperatures, embryos are burning up inside their eggs and the male population is dwindling. All this could lead to extinction. The Turtle Hospital in Marathon treats many turtles suffering with fibropapilloma (FP), a virus that produces tumors. All species are affected, but the green sea turtles have been hit the hardest. FP is caused by environmental pollutants and changing water temperatures.

The tumors cover their eyes, flippers and can also be internal. According to the Florida Fish and Wildlife Conservation Commission, FP cases have increased nearly 400% since the mid-1980s. Sea turtles deal with enormous amounts of debris and plastic trash in the ocean. Even the immense power of the ocean can’t destroy plastic. Sea turtles eat shiny throwaway plastic items because they think “it’s food” (like jellyfish), and “it’s killing” them. Adult turtles may be able to pass plastic, but for hatchlings it’s a death sentence. Plastic pollution not only kills turtles, but all marine life – even sea birds and whales.

Sea turtles are drawn from their nests back to the water by the brightest horizon, typically the moon and the stars reflecting off the ocean. But street lights and other beachfront lighting cause disorientation. Most (90%) of turtle nesting occur on Florida beaches, and the loss of hatchlings by improper lighting is a major obstacle to their survival.

Every day, human activity and carelessness is responsible for the death of sea turtles. They suffer from a range of injuries, including marine debris ingestion, marine debris entanglement, unintentional boat strikes and inadvertently being snared by commercial fishing nets.

You can help fix this problem by being a part of the solution. Here are a few suggestions: