We Should Never Have to Vote in Person Again

Our new paper shows vote-by-mail dramatically boosted Colorado’s turnout. It could change this fall’s election and every election after.

The authors are political science researchers. 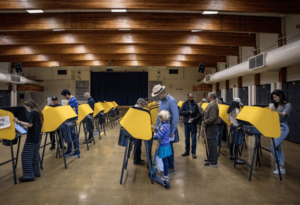 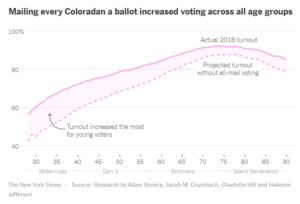 As the coronavirus continues to spread throughout the country, there are growing concerns about whether in-person voting can be conducted safely in the months ahead, including for the November presidential election. A huge expansion of mail voting is one way to ensure that participating in democracy won’t undermine public health.

The idea of “all-mail voting” is straightforward: Every registered voter gets sent a ballot via mail to their home address, then after making their choices, voters mail it back; and those who want to still travel to vote in person can do so. In the midst of this pandemic, it’s an adjustment that every state legislature should try to make.

But should we expand mail voting beyond the Covid-19 crisis?
Nathaniel Persily, a professor at Stanford Law School, and Charles Stewart III, a professor of political science at M.I.T., argue in a recent article, “States should approach this situation as an emergency, not as an opportunity to make long-term changes to election policy.” We disagree.

Our new research, published yesterday, shows that elections with all-mail voting increase turnout among everyone, especially groups that tend to vote less frequently. Those results merit permanent, wide-scale shifts. Currently, registered voters automatically get a ballot by mail in five states: Oregon, Washington, Utah, Colorado and Hawaii. A few other states have all-mail voting in small jurisdictions, and California has been gradually rolling it out.

Before this year, the results of research into all-mail voting’s turnout effect had been mixed. Past studies of all-mail voting, mostly of its early years in Oregon and California, argued that it does boost turnout, but mainly for those who already vote. If that remained true, then mail voting could actually exacerbate present inequalities in political participation.

So when we began our research, we wouldn’t have been surprised by unequal outcomes. Young people, notorious for their low turnout rates, use traditional mail less than other groups. And people of color — who have been subjected to centuries of voter discrimination — might be skeptical of adopting big changes to an electoral system that has disadvantaged them.