Now that a reformist administration is on the verge of being inaugurated in D.C., we can anticipate that some of the most urgent changes in national voting laws will have a chance of being implemented.  During the last Congress, two bills, H.R. 1, For the People’s Act and H.R.4, The John Lewis Voting Rights Advancement Act were passed by the House of Representatives, but never taken up for consideration in the Senate.  With some modifications to address the problems that occurred during the 2020 Election, we know that both bills will be re-introduced during the 117th Congress.

H.R.1, For the People Act is comprehensive voting legislation that would, inter alia, make voting easier and more accessible; lower barriers to running for office by addressing the problem of money in politics; and require independent redistricting commissions.   The Brennan Center calls it “historic legislation that contains key reforms to revitalize American democracy”.  (For a complete summary of this 706-page bill, go here or for an annotated bill click here ). 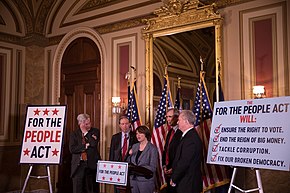 One of the most important proposed changes in H.R.1 is a requirement for automatic voter registration. The United States is the only major democracy in the world that puts the onus on individual citizens to navigate a bureaucratic system to register to vote.  Elsewhere, governments consider it their responsibility to ensure that all citizens are registered.   Sixteen states and the District of Columbia already have automatic voter registration. H.R.1 would make such a system the national standard.  When an individual interacted with any designated government agency (e.g. Social Security), he or she would automatically be registered to vote unless the person decided to opt-out.  Such an automatic registration system would likely add millions of voters to the rolls and be less costly and more efficient than the current systems.

H.R. 1 is replete with key reforms to our voting system but perhaps none is as crucial as the establishment of a small donor matching program to get big money out of financing elections.  Candidates would opt into the system by raising enough small start-up donations to qualify and accepting certain conditions such as lower contribution limits.  These individual donations of $1-$200 would be matched by public money at a six-to-one ratio.  This is by no means a new concept.  It has been used in states as well as locally (e.g. New York City).  Even most major-party presidential candidates between 1976 to 2008 used matching funds in their primary campaigns.  Addressing money in politics really does need to be one of the priorities of America to sustain our democracy.

Just to note one more essential provision in H.R. 1.  To tackle the terrible problem of gerrymandering in America, the bill proposes that states use independent redistricting commissions to draw congressional maps.  If we could require a uniform set of rules to draw districts and insist that map-drawing by done by commissions untainted by purely political considerations, this would go a long way to reinvigorate our electoral system.

H.R.4, The John Lewis Voting Rights Advancement Act, also must be a priority for the New Congress in order to address the immense amount of damage that the 2013 Supreme Court decision, Shelby County v. Holder, did to the Voting Rights Act of 1965.   The Voting Rights Act has widely been recognized as the most important Civil Rights legislation that this country ever passed.  When the Supreme Court eviscerated the provision in the Act that required designated states and localities that had a history of racial discrimination to get preclearance from the Department of  Justice or a court before they changed their voting laws, the floodgate opened to all sorts of discriminatory changes by the states.  For example, ID laws were introduced, polling places in minority areas were closed, and voter purges occurred.  H.R.4 responds to the Supreme Court decision by updating the Voting Rights Act and making it functional again to stop discriminatory voting practices.

No doubt we may see some election legislation at the state level in Florida, but we should also pay attention to the progress of both these bills in the 117th Congress.  If they were to pass, we could be much more optimistic about the future of American democracy.