‘Track your ballot like a package’: How technology will smooth the way for November’s mail-in ballot surge

As many states rush to implement new ways to protect voters from COVID-19 exposure, they’re turning to systems to help ensure people’s access to the ballot doesn’t get lost in the mail. 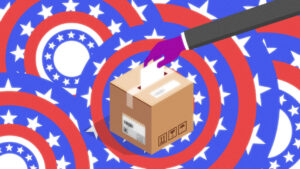 As part of a string of voting laws signed by Virginia Governor Ralph Northam in mid-April, the state became the 34th in the country whose residents may vote by mail without having to prove that they couldn’t vote in person. Of the remaining 16 states that don’t grant that right, governors and election officials in 11 allowed exceptions during the primaries on account of the pandemic—and if the coronavirus is still lingering in November, might be expected to continue those exceptions.

“Whether they want to or not, all states are going to see a dramatic surge in mail voting this year because of the pandemic,” says Wendy Weiser, director of the Democracy Program at the Brennan Center for Justice. “There are a lot of changes we’re going to need to make to be able to have a safe and fair election.”

States that are relatively new to the process of voting by mail will have to scramble to establish infrastructures to accommodate it before November, and to quell voters’ fears about mail mishaps—both ensuring people get their ballots and communicating to people that their votes were counted. For that, they’ll need intelligent ballot tracking.