The State of Play

Hacking, Glitches, Disinformation: Why Experts Are Worried About the 2020 Census

In the run-up to the 2020 census, the government has embraced technology as never before, hoping to halt the ballooning cost of the decennial headcount. For the first time, households will have the option of responding online, and field workers going door to door will be equipped with smartphones to log the information they collect.

To make it all work, the Census Bureau needed more computing power and digital storage space, so it turned to cloud technology provided by Amazon Web Services.

What the bureau didn’t realize — until an audit last year — was that there was an unsecured door to sensitive data left open. Access credentials for an account with virtually unlimited privileges had been lost, potentially allowing a hacker to view, alter or delete information collected during recent field tests.

The Census Bureau says that it has closed off this vulnerability and that no information was compromised. But the discovery of the problem highlights the myriad risks facing next year’s all-important headcount.

Most concerns about the census have been focused on the Trump administration’s effort to include a question about citizenship status. On Wednesday, the Justice Department, under pressure from President Trump, vowed to continue fighting to add the question, despite legal and logistical barriers, a day after saying time had run out. But far less attention has been paid to other issues that could threaten the census’s accuracy.

Each census is a staggering logistical lift, but the 2020 count presents challenges the Census Bureau has never confronted before.

The government has ambitious plans to use new digital methods to collect data. But the Census Bureau has had to scale back testing of that technology because of inadequate funding — raising the risk of problems ranging from software glitches to cyber attacks.

Also new is the threat of online disinformation campaigns reminiscent of the 2016 presidential cycle. The heated political discourse about the citizenship question has supplied ample fuel, and researchers say they are already beginning to see coordinated online efforts to undermine public trust in the census and to sow chaos and confusion.

The intense focus on the citizenship question “has drawn away energy and resources in ways that have really been counterproductive to the bureau’s efforts,” said Arturo Vargas, chief executive of the National Association of Latino Elected and Appointed Officials. “To some extent, the bureau is going into 2020 blindfolded.” 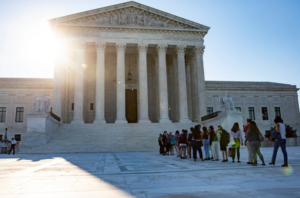 The Trump administration dropped efforts to add a question on citizenship to the 2020 census after being blocked by the Supreme Court.CreditSamuel Corum for The New York Times

The consequences could be profound and enduring. Information gathered during the census is used to determine which states gain or lose seats in the House and votes in the Electoral College, to redraw congressional districts and to allocate hundreds of billions of dollars in federal funding for a host of services, such as health care, education and affordable housing. Businesses rely heavily on the data to make decisions about where to open stores or ship goods.

The Census Bureau said that it has fixed problems identified during testing and is working with other government agencies and private companies to guard against technical mishaps, cyber-related vulnerabilities and the spread of misinformation. “We are confident in the resources we have to conduct a complete and accurate census,” the bureau said.

But the danger if anything goes wrong, said Terri Ann Lowenthal, a former congressional staff member and longtime census expert, is that “public confidence plummets and people decide this is not going to be a good census so we’re not going to respond.”

“At that point,” she said, “we could be headed toward a failed census.”

Mandated by the Constitution, the census has been conducted without fail every 10 years since 1790. The first was conducted by United States marshals who traveled on horseback and asked residents just six basic questions.

Since then, the census has grown far more elaborate, though the process for conducting it — mailing out paper forms and relying heavily on field workers going door to door — remained essentially the same from 1970 through 2010.

Over time, however, costs have soared while response rates have declined. The average cost, in 2020 dollars, to count one housing unit increased from about $16 in 1970 to about $92 in 2010, a Government Accountability Office analysis found.

“We needed a breakthrough,” said Robert Groves, director of the bureau during the 2010 census. “We couldn’t continue the trend of inflating costs using the same methods.”

The transition to new technologies for 2020, such as issuing smartphones to field workers, represents a “huge jump” in the right direction, Mr. Groves said.

The greater use of data collected by other agencies, such as Medicare and Medicaid, could help identify vacant households, making more costly in-person follow-up visits unnecessary. Software that tracks field workers’ progress and directs them to optimal routes could save time. 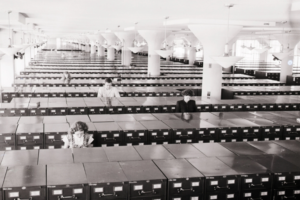 Census Bureau files, circa 1949, contained a card for every person in the United States.CreditBettman Archive, via Getty Images

For experts, the greater use of technology raises two primary questions: Does it work, and is it secure? The Census Bureau’s efforts to answer those questions have been hampered by inadequate resources.

Security tests of some IT systems that were originally supposed to take up to eight weeks had to be completed in about one week, the G.A.O. found. The bureau conducted its critical 2018 dress rehearsal, planned to take place in three communities, in just one: Providence County, R.I.

Though the bureau said it has fixed the problems identified during this dry run, the G.A.O. expressed concern over the missed opportunity to test new technology in places such as rural West Virginia or tribal land in Washington State — areas that would have been covered under the original plan.

“Our concern is that the bureau may not know what it doesn’t know,” said Robert Goldenkoff, director of the Government Accountability Office’s strategic issues team. “Not every place looks like Providence, Rhode Island.”

In Providence and during other, smaller-scale field tests, census workers encountered technological issues, the G.A.O. reported. A software glitch sent multiple canvassers to the same block. Some workers had trouble finding an internet connection to transmit the information they had collected. Others had trouble recording people’s responses in an application on their smartphones.

These types of small hang-ups, while manageable in one community, could amount to big problems on a national scale, G.A.O. has warned. 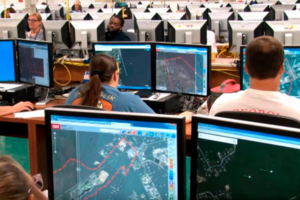 Census geographers at the bureau’s headquarters in Suitland, Md., use images captured from satellites and planes to verify addresses in rural communities and compare them with previous maps.CreditU.S. Census Bureau, via Associated Press

And then there is the risk of a cyber attack. The Commerce Department’s Office of Inspector General, which discovered the cloud security problem last year during an audit, said the vulnerability it found was “potentially catastrophic.” If a hacker had gained access to the lost user credentials, the inspector general found, the Census Bureau “would have been powerless to stop an attacker from causing irreparable harm.”

The Census Bureau said it has been able to test its IT systems in a variety of settings and that its cybersecurity team “is partnering with federal agencies including the Department of Homeland Security, the federal intelligence community, as well as industry experts to share threat intelligence information.”

“In the case, we do face an incident,” the bureau said, “our team is prepared to take action to contain the threat and share information, as soon as possible, if there is any impact on the American public.”

The potential spread online of bogus or misleading information presents another novel risk.

“If you wanted to provoke fears among the population as to how the census data could be used,” said Nathaniel Persily, a professor at Stanford Law School who studies the interplay of technology and government, “the American population is fertile ground right now for conspiracy theories and manipulation.” 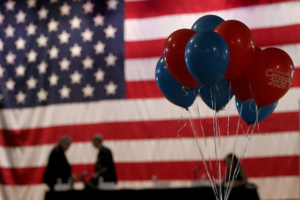 The controversy over the citizenship question could provide fodder for provocateurs seeking to spread falsehoods and confusion. Groups monitoring for this sort of content said they had already seen examples appearing, primarily on far-right websites.

Numerous experts cited a recent post on a neo-Nazi website urging people to apply for a job going door to door for the Census Bureau so they could report suspected noncitizens to Immigration and Customs Enforcement. Doing so, however, would be illegal. Census workers are required to swear a lifetime oath not to disclose respondents’ personal information, including to other government agencies, under the penalty of up to five years in prison and a $250,000 fine.

So far, such posts seem to originate within the United States, said Maria Filippelli, a public interest technology census fellow at New America. But she expects eventually to see foreign actors intervene as well.

“There are a lot of people who want to undermine our democracy, very similar to what we saw in the 2016 election,” she said.

The Census Bureau said it is working with big technology companies, including social media platforms such as Facebook and Twitter, to detect and counter disinformation efforts. One way, the bureau said, is to make sure that accurate information is highlighted at the top of search results, while fake websites and misinformation are pushed to the bottom.

Facebook announced on Sunday that it is expanding its efforts to combat election interference to include bad information about the census or threats of violence toward anyone participating in it.

A Twitter spokesperson said the company has met several times with Census Bureau officials “to discuss the best ways to support a healthy conversation on Twitter regarding the 2020 Census.”

Given the distrust among groups that historically have been undercounted, the bureau’s efforts to build trust through partnerships with businesses and local community leaders will be both more important and more difficult than ever, census experts said.

Persuading the reluctant to respond “will require much more repetition than in the past,” Steve Jost, a former Census Bureau official, said.

Enlisting the aid of businesses to promote participation is proving much more challenging now, said Mr. Vargas, of the organization of Latino officials. In the past, he said, companies agreed to incorporate census-related messages in advertisements and store displays, for example. This cycle, that has changed, he said.

“I have not seen the level of reluctance among business leaders to participate in a census like this one,” Mr. Vargas said. “Business leaders are allergic to issues that are perceived to be controversial, especially if they have any kind of racial controversy mixed in.”

The greatest risk to the census, former officials say, is that the public loses faith in the legitimacy of an independent institution at the core of American democracy — whether because of a crashed website, a partisan fight or a drumbeat of disinformation.

“The price is poor quality data,” Mr. Jost said, “and the price of that lives with us for a decade.”