Suffrage at 100: A Visual History 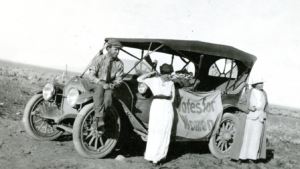 On May 18, 1915, crowds streamed into the Polo Grounds in Manhattan to watch the New York Giants take on the Chicago Cubs. But beyond the diamond, a bigger contest was brewing.

The state of New York was gearing up to hold a referendum, putting the question of women’s suffrage to its (all-male) electorate. Supporters of the cause organized a “suffrage day” game, luring potential voters with the offer of a piece of chocolate cake with every ticket purchased at their headquarters. They festooned the stadium with yellow banners and printed baseball-themed fliers, with exhortations like “Fans, Fair Play” and “Make a Home Run for Suffrage.”

Everybody, The New York Times noted, “had a ‘lovely’ time.” But the festive mood would fizzle out come November: The men of New York rejected the suffrage measure, and its women would have to work another two years for the right to vote.

Votes for women was a demand that was both radical and all-American. And the nearly century-long history of how women won that right is as colorful and kaleidoscopic as it is complicated and almost impossible to sum up.