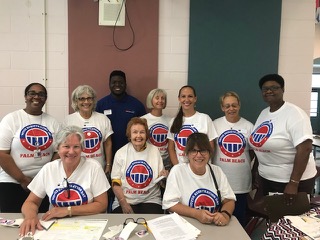 Tired League volunteers are justifiably happy to see September come to an end! It has been an exciting, but exhausting month of activities, which had teams of voter registrars up at Jupiter High School at 7:00 am on a Monday morning and others at 8:00 pm in Belle Glade on a Friday night, as well as everywhere in between.

Teams spread out among all five campuses of Palm Beach State—Belle Glade, Lake Worth, Loxahatchee Groves, Palm Beach Gardens and Boca Raton, as well as two campuses of Keiser University and Lynn University. Kudos to Nancy Ballen and Phyllis Applebaum, who headed up this project, as well as the many dedicated volunteers who collected 181 registrations. Great job!

After a brief weekend of rest, many of those same volunteers turned out again for National Voter Registration Week, where all 26 public high schools in the County held lunchtime voter registration events.

For the second year in a row, the League, in coordination with the School District, organized this massive event requiring hundreds of hours of scheduling and logistics planning. Hats off to Diane Marks from the League and Lori Dool from the District, for their great work in pulling off this massive undertaking, which netted an outstanding 1689 new registrations of 16-18- year-olds!

We want to express our appreciation to all of our volunteers, who were universally enthusiastic about registering young people. We hope that each of you had a rewarding experience and will be back for more next year.