Voting — it’s a right many take for granted.

But one lost that right if sentenced to prison in Florida.

Next week, thanks to a state constitutional amendment approved by voters in 2018, a Riviera Beach man plans to cast a ballot for the first time ever in his life.

“I am so excited to cast a vote,” said William Freeman, speaking with CBS12 News via Zoom.

Freeman said he grew up in Palm Beach County, but got addicted to cocaine, leading to four different stints in state prison, for charges ranging from grand theft and burglary to fraud.

This past December, Freeman finished serving his most recent, three-year sentence. This time, he said, he’s a different man.

“I am sober, and I have to give all the credit, first to God,” said Freeman, who also thanked the people who helped with his re-entry to society.
Freeman is working, and two months ago, he registered to vote.

Until recently, felons exiting prison would have to petition the Governor and Cabinet to get their voting rights restored, often a difficult process.

Two years ago, the state’s voters approved Amendment 4 by a nearly two-to-one margin.

The measure restores voting rights to non-violent felons who’ve completed sentences and probation. The amendment does not apply to those convicted of murder and sexual offenses.

But then the governor and state legislature approved a law requiring felons to satisfy all fines, fees and restitution, before winning back the right to vote. This state law is now the subject of a challenge in court.

Freeman, though, in the process of paying off his court costs, was still able to register to vote. 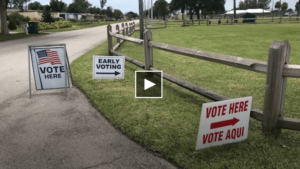 As he spoke with CBS12 News, tears started to roll down his face.

“It touches me, first of all, because I’m 51 years old, I have three kids, two girls and a son,” said Freeman, adding he’s voting with their futures in mind.

“The thing that equalizes all of us is our right to vote,” said volunteer Arlene Ustin, who helped Freeman register to vote back in June.

Ustin, who works with the League of Women Voters and other groups, said despite the ongoing court battle, many who’ve left prison, so-called ‘returning citizens,’ qualify to vote already, and various organizations are working to connect with them.

“We’re trying… to reach the people deep in communities that may not know they have a right to vote restored to them,” said Ustin.

Freeman has also been active in helping people like himself register to vote.

“I’m so proud to be American, so proud to be able to stand in line, to say ‘hey, let me cast my vote,’ and wear that sticker that says I voted,” said Freeman.

Both Freeman and Ustin said felons who’ve left prison should check on their status, to see what they need to do to be able to vote.