Groups fan out to churches in push for voter registration

By Abraham Mahshie Special to The Post
Posted Nov 17, 2019 at 6:42 PM
Read the article online at the Palm Beach Post

Volunteers were at five local churches Sunday to register voters and provide checklists for former felons, often called returning citizens, to get their voting rights restored. They also gathered signatures in support of assault weapons ban. 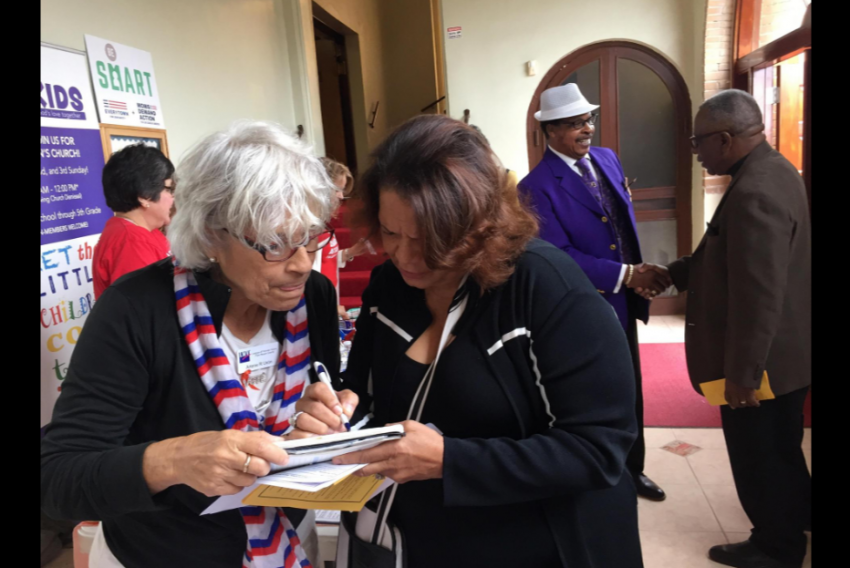 WEST PALM BEACH — Before the organist at Tabernacle Missionary Baptist Church had pressed his fingers to the keys Sunday morning, 75 parishioners had signed a ballot initiative calling for an assault weapons ban. Several had registered to vote, and many more learned that their friends and family who had served their time for committing a felony could not be held back by any law or court fees — there was a path to voting again.

“If we’re religious folk, forgiveness is part of our whole thing,” said pastor Gerald Kisner, who has been leading worship and encouraging civic activism at the century-old Northwest community church for 25 years.

“Voting is so simple that that should just be guaranteed,” said Kisner. “There’s just certain forces that want to just keep the lid on more progressive elements, and I just think that’s what it is. A lot of the powers know that or think that they would be voted out. They should be voted out!”

Members of the League of Women Voters and gun-control advocacy group Moms Demand Action, were at the church to register voters and provide checklists for former felons, often called returning citizens, to get their voting rights restored.

Volunteers fanned out across five churches in Riviera Beach and West Palm Beach Sunday, and intend to hit another five churches on Sundays in the run-up to the 2020 election to register voters.

“We will pick out five more churches and keep going because it’s an outreach to those returning citizens,” said Arlene Ustin, who helped organize the League of Women Voters’ turnout across the county Sunday. “Their lives have been such that they might not even know that they have their rights restored.”

Voters passed Amendment 4 last November, but the state law putting the measure into effect also includes what critics say are roadblocks. Among the hurdles, they say, is the requirement that former felons must pay in full any outstanding court fees associated with their case.

“What you’re saying is if they owe that money, that’s a poll tax, that’s back to Jim Crow. That’s suppressive,” said Ustin.

Palm Beach County State Attorney Dave Aronberg on Nov. 7 announced a workaround to immediately get returning citizens registered to vote. The county clerk’s office and the public defender are standing by to help returning citizens set up payment plans while also separating court costs and fees from their sentence docket, paving the way for the voters to abide by the new Florida law.

Kisner said the church has long encouraged people to be active in their community, and to believe that they have the power to change things for the better.

“They just say, ‘Hey my vote doesn’t count.’ But, we’ve seen many times that our vote does count,” he said, stressing that exercising the right to vote was especially important in today’s divided America. He said despite the lowest African American unemployment rate in history, many in the community disagree with President Trump’s policies and behavior.

Kisner also made the point at the end to remind parishioners that if they believe there was no place for assault weapons in their neighborhood, they could to stop by one of the two tables in the entryway to the sanctuary, where the volunteers were also gathering signatures for the assault weapons ban ballot initiative.

“Virtually everybody that I spoke to coming down the steps was registered and said, ‘Since I was 18, I’ve been voting,’” she said.