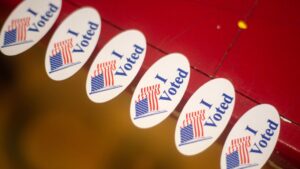 Once the 2020 General Election ended, I was determined to continue my service with the Palm Beach County Supervisor of Elections for the local municipal elections. There were no elections in Royal Palm Beach, but I did not mind the thought of driving half an hour to another precinct since it was all confined in the same county anyway.

I followed the standard procedure of filing the goggle docs application to show my interest in helping out. I attended the training that I have attended before for past elections in 2020 and 2018 as a Poll Inspector, with very little having changed except for an improvement of the class layout, more visual technology like screens and projectors, and new instructors. Once the session ended, I walked up to one of the assistants to get my precinct location.

All I knew was that the election date was March 9 and that there were no early voting days. When I asked for my precinct location, I found out I was not actually confirmed for training. When I applied on Google Docs, it was to only confirm I was willing to help, but I was not given an immediate position. They were able to quickly place me on standby if any positions opened. Everyone was helpful as always and I would wait to see if I was given any assignments. There was speculation as to where I might be placed as a deputy, and I continued to wait. It was not until the last week of February when I received a call regarding my position. It was from Palm Beach Gardens’ City Clerk, who regulates municipal elections in her own jurisdiction. I was called to confirm my position as a clerk. I contacted SOE to confirm if this was true, and it was. I was assigned as one of the leaders for the election teams. It was a first for me. Because of this last-minute arrangement, I was scheduled for one of the last Clerk trainings, and I attended it the next day, on 2/26/21. It took up most of the day, from 9:30 AM to 3:30 PM. It was there I received my precinct location, 1250, in Palm Beach Gardens at the High School on Military Trail.

As a Clerk, I would be given multiple tasks, on top of being in charge of the election at the precinct. My duties included the following: ensure the welfare of the other poll workers, set up EviDs a day in advance, fill out and provide provisional ballots, deliver the final tabulated ballots to the SOE Main Office, check-in poll workers, deliver oaths of duties, take temperatures during the pandemic, deliver my blue bag with supplies, count inventory, including the ballots, utilize a special phone to keep in contact with IT, and aid with keeping track of all the numbers of the machinery.

A few important facts were noted.

While waiting for March 9 to arrive, I was anxious: never have I have been given the prestigious responsibility to making sure an entire precinct’s election went smoothly. On March 2, the City Clerk called. She asked if I was ready for the Deputy position. It turns out the stand-by position was still attached to my position. Turns out they were able to obtain an experienced clerk, and I was switched back to the position of deputy. I was still happy to aid in the election, and in honesty, I felt relieved. It is important to note I am still finishing my final semester of college, and I still take care of my parents while I am still home due to the Covid-19 pandemic. The responsibility of organizing an entire precinct lifted off my shoulders was a breath of fresh air for me.

On March 9, I woke up at 3:30 A.M., and by 4:30 A.M., I left to drive to Palm Beach Gardens Community High School. When I arrived, I was figuring out the lay of the land, meaning I was lost and trying to figure out where to park. The custodians who were on site were kind enough to help set up the parking spaces and showed me where to park.  Someone was late but I was mainly concerned about my work. My work was much easier than the last election. I primarily helped set up voting signs. The good news was that the weather was lovely and there was a strong breeze. The bad news, there was a strong breeze, and I had to keep going back and forth in my bright orange vest to collect more tape.

When the polling place opened up, after sweeping the entrance, removing the mats, and setting up the No Solicitation sign, I was not allowed to enter inside the polling place again unless given permission by the Clerk himself. Only 41 voters showed up at our precinct. The results of the entire election are available at https://www.wpbf.com/article/palm-beach-county-municipal-election-results-march/35509171. Each of the 41 voters was either middle-aged or seniors. When standing guard outside, a few of the elderly voters, many of them women, appreciated the fact someone as young as I was helping out at such a small election for them.

Although it was a rewarding experience, and I would gladly do it again, it was extremely boring, with the few benefits being blissful silence and beautiful weather. Some voters mentioned that taxpayers would be upset if they found out how much they were paying for low turnout rate elections. The only real exciting thing I got to do was to politely tell two students who were soliciting and dancing to music (most likely for social media platforms), that they could continue doing that outside the 150 foot No Soliciting perimeter.

At the end of the election, which was at 7:00 P.M., I collected all the signs and was allowed to leave early, while the others were mandated, with a new policy, to stay at the polling place until all the counted votes were confirmed by the SOE Main Office. I left around 8:30 P.M. The election was a success.