Read the online article at The Palm Beach Post 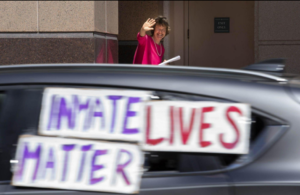 Point of View: Certainly, some of the inmates in the jails are dangerous and should be kept there pending trial. But not all.

It has long been written that society is judged by how it treats its most vulnerable. Every government official from President Donald Trump on down is talking about containing the coronavirus to protect people. One group is being forgotten, the inmate population at the two Palm Beach County jails.

In a recent Palm Beach Post article, Palm Beach County Sherriff Ric Bradshaw alleged, incredibly, that no inmate has the coronavirus. That is a ridiculous statement. Inmates may be tested for a fever when entering, but no real coronavirus tests are given any of them. They come off the streets from the general population that we now know is full of the virus. If we don’t have enough tests for the general public, we certainly aren’t using tests on inmates.

The Sherriff said he will not release inmates, but I don’t think that the release of inmates is his job. It is the job of the State Attorney, the Public Defender and other defense lawyers and the courts.

There is precedent for releasing inmates in these emergency times. Several years ago, when Barry Krischer was the Palm Beach County State Attorney, he personally went to the jail when one of our dangerous hurricanes approached. With a member of the County Public Defender’s Office and a judge, Krischer and the group went through the file of every inmate and agreed to an order releasing many of them on minimal bond pending trial or by reducing the misdemeanor sentence some were serving to “time served” so they could be released.

We are never going to get the tests needed to test every inmate in the jails. The size of group cells prohibits people from practicing social distancing. The health situation at the jails is suspect in the best of times. If an inmate is not so dangerous that we have to keep them in jail, for the sake of other inmates as well as sheriff’s corrections deputies, State Attorney Dave Aronberg should follow precedent and, with Public Defender Carey Haughwout or member of the Palm Beach County Association of Defense Lawyers and a judge, release whoever can be released without endangering the public. That would apply to a lot of inmates in our jails.