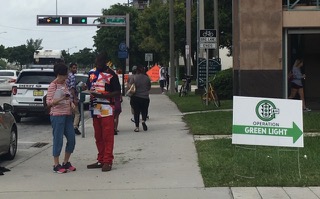 Phyllis Applebaum engages with a prospective voter during Operation Green Light at the Main Courthouse in West Palm Beach.

On Saturday, October 19, the County Clerk’s office opened all four of its courthouse locations for “Operation Green Light”, a massive event aimed at helping those with outstanding court fees or fines and suspended driver’s licenses to get back into compliance.  Offenders benefited from the waiving of collection agency fees – some as high as 40 percent – for those who paid off their court obligations in full or signed up for a monthly payment plan.

Snaking around the building, the lines were hours long.  People, some with small children in tow, resigned themselves to spending most of the day there.  But those stalwarts who persevered and completed the process walked away with huge smiles of relief on their faces after having their suspended licenses reinstated.  Many ex-felons (returning citizens) were also there to pay outstanding obligations.

Eager to take advantage of the huge crowds of potential new voters, Voter Services mobilized volunteers.  Results varied according to venues.  At the Main Courthouse in West Palm Beach, volunteers were limited to approaching people on the sidewalk.  We were not allowed on the Courthouse property, so our people were on their feet for entire 3-1/2-hour shifts, under a threatening sky. 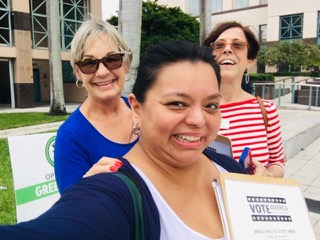 Our volunteers were very disappointed at the North County Courthouse in Palm Beach Gardens when PBSO turned them away, saying they were not permitted on the property.

Folks in Delray Beach had a better experience and were actually welcomed.  One officer approached team leader Nancy Ballen to ask what they were doing there.  She replied, “We’re registering voters.” and the officer said “Oh, that’s great.” and went over to inform her fellow officers.  League members were able to approach people as they waited in line for their turn in the Clerk’s office.

The night before the event, the equipment bags had been carefully packed and all of the volunteers knew their venues and time slots.  Then at 9 pm, we got copies of a checklist for Restoring the Vote for Ex-Felons, which had been distributed at an event organized by Alpha Phi Alpha fraternity.  We thought it would be very helpful and went to work making sure team leaders got it in time to make copies for the next morning.

Although I never asked anyone if they were ex-felons (that’s a no-no), I asked them if they wanted to register to vote, and they volunteered the information.  Most told me they figured they would never be able to vote.  Some knew about Amendment 4, but amazingly didn’t know how it affected them—a kind of fatalism that really smacks you in the face.  I handed out 30 or more copies of the checklist and just having it seemed to put a smile on people’s faces.  I remember one man, holding the piece of paper in the air and thanking me profusely for “helping him.”  His heartfelt thanks gave me a lump in my throat.  I guessed that probably there weren’t many people helping him in his life. 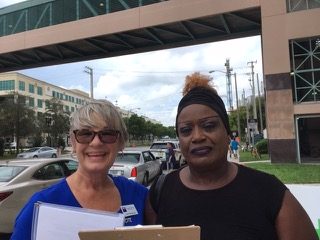 Pam Maldonado spoke at length with a lady named Agnes about how important voting is. Agnes was very anxious to tell us that she urges all of her children to vote in every election.

Despite some disappointments, Operation Green Light has strengthened my admiration for Voter Services and the League of Women Voters.  We had a major challenge and our volunteers stepped up and did the best they could do to help a forgotten group—returning citizens–to get a second chance, something that everybody deserves.   I think that we can take a long look in the mirror and be proud.