Nothing in my previous life prepared me to be involved in making videos. I was a pediatric ICU nurse, stay-at-home mom and eventually worked in property management. But being active in the League gives you the opportunity to grow and learn all sorts of new skills.

In September, out of the blue, we were contacted by a freelance video producer named Shea Elmore, who lives in Amsterdam. He offered to donate his services to help produce Get Out the Vote videos for us. To say we were gobsmacked would be putting it lightly!

Of course, our first question was how to cover the costs of production and marketing the videos on YouTube. League member, attorney Salesia Smith-Gordon, a dynamo in high heels, offered to make a personal donation and then obtained the remaining funds the Palm Beach Justice Association and attorney Byrnes Guillaume. We had the money we needed!

Our team of Salesia, Ken Horkavy, Shea and I worked on finalizing scripts and picture selection. Voiceovers were done by Shea, Salesia’s husband Lawrence Gordon, and her multi-cultural, multi-generational office staff. Spanish and Creole subtitles were added so that anyone who had subtitles activated on their cell phones would see the text in their language.

The videos went up on YouTube and were viewed around 15,000 times, although we had hoped for even more. Increased activity from political campaigns as Election Day approached boosted the per view price tremendously, depleting our funds faster than anticipated. That’s a lesson learned for next time! The videos do not contain anything that dates them, so we will be able to use them again earlier next election cycle.

We are so grateful to Shea, Salesia, Byrnes and the Justice Association for partnering with us on this very exciting undertaking. We look forward to working with them again in the future. 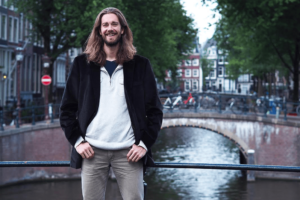 Where did you grow up and go to school?
I grew up the suburbs of Fort Lauderdale (Cooper City & Pembroke Pines), going through the Cooper City school system, and then on to UCF for a bachelor’s degree in theatre. From there, I moved to New York, where I spent a decade working for Blue Man Group as well as running my own interactive theatre company.

What is your connection with Palm Beach County?
In the early 2000’s, my family gradually moved from Broward County up to Palm Beach County, and they’re all there now – my dad and stepmom live in Wellington; my sister and brother-in-law, and their two kids, live in Boynton Beach; my mom and stepdad also live in Boynton Beach, after some time in New Mexico. I also have an aunt and uncle that have been living in Boynton Beach for as long as I can remember. I spent some time during high school and college living with my dad and stepmom in Wellington, which is where I’m registered to vote.

Where does your passion for this year’s election come from?
I believe that voting is the least that we can and should do as responsible citizens in a democratic society. I believe that too many people neglect their right to make their voice heard based on an assumption that either their vote won’t matter or that politics doesn’t affect them. But if recent history has shown us anything, it’s that elected officials have a major impact on every aspect of our lives, whether or not those outcomes are in plain sight. I don’t believe my strength is as a phone bank volunteer, particularly being based in the Netherlands right now, but I saw the call for video producers on the LWVPBC website, and I knew that was something I could help out with. From there, it was simply a matter of putting my skills where they could be most useful and hopefully encouraging at least a handful of people to get out and vote.

How long have you lived in Europe?
I moved to Amsterdam in May 2017, so just over three and a half years.

How did you end up in the “Old World?”
The dream to move overseas and explore more of the world began over 10 years ago. I knew I wanted to discover different cultures, to get out of my comfort zone, to learn how other people lived, and to learn more about myself in the process. My work at Blue Man Group as well as my own theatre company kept me grounded in New York longer than I anticipated, but it also provided me the opportunity to grow skills as a producer and leader that suited me well with the international move. My partner and I then found a way that we could move to Amsterdam and work as freelancers, and after some diligent planning and budgeting, we took the leap and haven’t regretted it once. It’s been an incredible journey, and we’re constantly excited about what the future holds.

Anything else you want to add — about your family?
I take a lot of pride in my family, and this past year has been one of particular concern for their well-being. My sister & brother-in-law are both firefighters and first responders for Broward County, so they risk their lives daily on calls, especially COVID-related now. Both my dad and my stepdad are Vietnam veterans, and due to health concerns, they are being extremely cautious with any interactions outside of their homes. My stepfather is also Black and has talked about his heightened stress with racial tensions in the wake of George Floyd’s death. Being based in Amsterdam, I don’t feel the effects the US government as strongly on a daily basis. However, it was ultimately for my loved ones that I realized I needed to take action.

Were you able to vote from Amsterdam? If so, how was your experience?
Yeah, we voted from here with absentee ballots. I forget the exact steps, but I recall it being pretty simple. We received emails from the election office well in advance to confirm we still planned to vote and to make sure our address was correct. The online system was simple, and it was great to be able to check to make sure ballots were received on time.
I also think I first came across League of Women Voters while using Vote411.org – the breakdown they have on candidates, both federal and local, as well as ballot initiatives was such a great resource to better understand who and what I was voting for. So kudos for that initiative. 🙂