My Experience as a Poll Worker

My Experience as a Poll Worker: My Memoirs 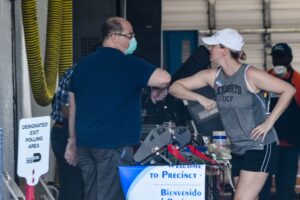 Report for the League of Women Voters on my personal experience as a Poll Worker during the 2020 Primary Election on Election Day (August 18). I was not looking forward to waking up at 4:20 a.m. during my summer break. Generally, I take advantage of staying up late and sleeping in late. However, when it was time to prepare myself for Election Day, I changed some of my lifestyle habits regarding my sleeping patterns. Fortunately, I was able to do this successfully. It helped that my precinct, Precinct 6118, is only a five-minute drive away from where I live. By 5:20 a.m., I arrived at my precinct, the Royal Palm Beach Library.

I brought my Poll Worker Manual and a large bag filled with snacks, water bottles, sandwiches, hand sanitizer, and extra masks, knowing the polling place will not close until 7:00 p.m. The Clerk in charge of the precinct led me to the back door, which would be used as the polling room exit. At 5:30, everyone arrived at work. There were eight of us, and each of us would have various roles given to us. What the Clerk did to surprise us was plugin and set up all the EVID Machines. These iPad-like machines are used by us Poll Inspectors to check in voters to make sure they are registered at our precinct. Since the EVID machines were already set up, the Clerk designated volunteers for new assignments.

One of these machines, which was essential to the election, was the DS200 Electronic Voting Machine. At first glance, it looks like a large trash can. However, this piece of machinery is what counts all the ballots marked and inserted correctly. Along with this, I also assisted with setting up the EasyVote machine, which almost no one has used for years. This machine’s purpose is for those voters with various disabilities who need assistance with filling out their electronic ballot. By 6:30 a.m., we had our polling place set up. We chatted with each other and scanned through our manuals before we opened at 7:00 a.m. on the spot: Election Day began.

A couple of voters walked up to the table, one of them approaching my ‘station.’ We greeted each other, I asked for the voter’s photo identification, and they provided me their driver’s license. I placed it on the small mount, facing the barcode so I could quickly scan it. Unfortunately, sometimes the code on the personal ID would not scan, due to the barcode being located on different sides of each ID. When this happened, I typed in the date of birth and last name of the voter. I checked the date of birth, name, party affiliation, and I checked the photo to see if the voter is the same as the voter who arrived in person. I then ask the voter to confirm the information I typed is correct, ask the voter to write their signature. After all of those steps, I printed a receipt and circled the precinct and ballot type. Then the voter goes to the ballot inspector, where the ballot is issued. A few more voters trickled in throughout the morning; otherwise, there was not much activity in the first few hours after we opened. We took this opportunity to converse with each other and wait for more voters to arrive.

During my time on site, there were only a few voters for whom we had to spoil their ballot. Most of the time, a voter would select two candidates for the same office by accident, and they corrected themselves with the second ballot provided. However, there were rare instances where it was more than two candidates, or where the voter did not know how to select their preferred candidate properly. One voter improperly filled out their ballot in the morning by drawing a line instead of filling in the circles. Unfortunately, that voter rushed out after casting her vote into the DS200 machine, and even though we caught up with her out the front door of the library (which we found out later we are not allowed to do), the voter did not arrive back in time, and we had to spoil that ballot. Another incident happened in the afternoon where another voter had to be issued a second ballot. That voter selected in the preferred candidates correctly but selected more than one candidate running for a particular office. What made this incident stand out was that the voter did this for every candidate, which means the voter chose two candidates in every office on the ballot. Fortunately, we were able to help this voter by providing them a second ballot.

Throughout the day, all of us helped out with various roles. The Clerk rotated us from Inspectors to Greeters, to Ushers helping the voters insert their ballots into the DS200, sanitizing the polling place when voters left, and acting as Deputy to prevent solicitation. I performed all of these roles myself, rotating every few hours, with a 30 to 40-minute lunch break at 1:00 p.m. Our team got along well, and we bonded throughout the day. That day we learned so much from each other from travel, what we did for work or school, why we wanted to be a Poll Worker, voters themselves, and how our precinct has had one of the best records in Palm Beach County. I will always treasure the conversation about the purpose behind voting, why we chose to be poll workers, and how the right to vote has evolved over the centuries. From one perspective, it is easy money for easy work.

On the other hand, our voting system is delicate. Not everyone chooses to participate in the election process beyond voting, and even then, not everyone votes for one reason or another. We have come a long way as a nation, but we still have work to do. There have been and always will be some problems to be addressed. That is why voting is essential in this democratic republic. We are all dependent on each other, and I felt compelled to participate in helping this country.

Besides a couple of technical glitches, which made the Clerk feel flustered due to having to wait on the phone line for IT longer than he wished, the election went smoothly, and by 7:00 p.m., closing time, we had no more voters. I helped finalize the votes counted by the DS200, and I was to electronically send them to the Supervisor of Elections Main Office in West Palm Beach. Unfortunately, I was unable to do so at that moment. The votes were counted, and the machine itself was working, but we could not connect our signal to the SOE. We realized that every precinct had this issue. Looking back, it was probably due to the thunderstorm we had that evening, which cut off our signal. In the meantime, we packed up everything else in our polling place and waited. An extra hour was spent lounging around. Finally, by 8:15 p.m., I gave it another shot. Fortunately, the third time’s the charm, and once the data was sent, I helped pack up the DS200, and after all of us double-checked everything, we finished by 8:20 p.m.