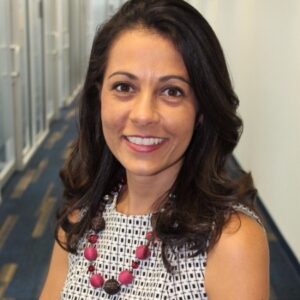 Renata Bozzetto, League member since 2018 represents everything that the “Founding Fathers” envisioned to propel the new country into greatness. In welcoming immigrants to our shores we have seeded our land with the diversity, intellect, culture and enthusiastic love for all that our democracy stands for. Renata, originally from Brazil, brings all of that to us in her work for League, and in her professional and personal life as well.

Thanks to Darlene Kostrub who spotted her volunteering at the polls in Boca Raton, Renata was quickly and easily recruited into League, where she chaired the Immigration Committee with Barbara Eriv. They created events supporting education and advocacy, organizing the “Know Your Rights,” series. She also became a member of the National Popular Vote Committee and the Young Leaguers.

Renata came here when she was 23 years old, to be reunited with her family, and was a political junkie even before she could vote. Her own journey to citizenship took more than a decade and she often quotes the statistic that in Palm Beach County one in every four residents was born outside of this country. “And,” she adds, “ we cannot attain the strong democracy to which we aspire if we disregard 25% of our population.”

Professionally, she is the Development Manager of the Florida Immigration Coalition (FLIC) where the work often overlaps with many of the goals of the League. FLIC’s mission is to make Florida a true home for all, including immigrants, and non-partisan civic engagement is integral to their work. She is also currently pursuing her Ph.D. in Sociology at FIU. She has an MA in Women and Gender Studies from FAU, where she learned and taught as well. Her work with FLIC represents a new role for her after years in academia.

“Busy,” is her mantra. Married to John since 2010 – she is the mom of 9-year-old Filipa, and 7-year-old John, all of whom love joining League events such as;  beach clean-up, trivia night, and the Habitat for Humanity Women Build team organized by the Young Leaguers.

Somehow she manages to find time to indulge her love for art, particularly ceramics, and to master another art — the chemistry of composting her garden. She finds time for 30 minutes of yoga, daily – plus occasional family and friends’ jaunts to the beach, fishing and camping. I’m guessing that she is a whiz at organizing her time.

As she contemplates the future, Renata muses, “Despite our ongoing challenges, I believe we have entered a regenerative moment… and I feel further energized to register voters, to educate, and to continue to be vigilant about upholding our democratic values.