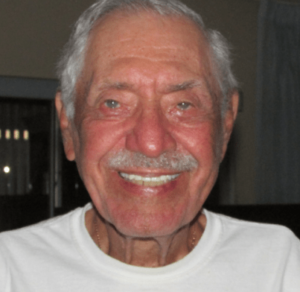 We could extol Les Rivkin for having achieved the most signatures on the Amendment 4 (voting rights restoration) petition in his group on the Voting Rights Committee. But somehow, being the father of nine children – eight of whom are female — seems like a phenomenon, albeit in a different category, to be equally awe-inspiring.

It seems that both of those factors, plus Les’s membership on the PBCNOW Board, and his work with Guardian Ad Litem, a volunteer statewide program advocating representation for children who have been adjudicated neglected or abused, caught Ken Thomas’ attention when they met there, as fellow volunteers.  And Ken was not one to let such a political animal get away.

Voting rights, the fight against disenfranchisement, is Les’s gig. “Politics is everything. And everything is politics,” he says, “I have been an advocate of the underserved forever. Six of my nine children are black and minority rights are ever on my mind. We can only change things through the vote.”

Also, a board member of the PBC ACLU, Les recognizes the importance of dialogue and discussion. “I have many friends from various political spectrums and I learn from them. I believe it is important for the League to maintain its non-partisan approach for us to consistently stay in the fight.”

I wouldn’t want to have to spend time listing all his credentials when introducing him to an audience, but for this purpose, why not! Les was a Past Executive Director of Planned Parenthood in Syracuse, New York, (where abortions were performed)  and the current President of a local African American Culture Club. As a professional Rehabilitation Counselor, a Case Worker within the welfare system, a substance abuse counselor specializing in persons who are abused as children, Les has seen and dealt with the underbelly of society from many angles.

Some of the unfinished business of politics much of which Les will likely leave to his, so far 22 grandchildren, that still needs to be seriously addressed: automatic voter registration in schools, mandated registration at the DMV, civics classes that have mock elections, alignment with houses of worship to help coordinate their registration efforts. And this, of course, is just the beginning. Get him started on Global Warming, immigration policies, the danger of the buildup of white supremacy, future Covid related health threats, and the proliferation of Robotics that will be likely to negatively affect the labor force— and he hasn’t even gotten to the mistreatment of animals yet.

And yes, he’s been married to his third wife for 37 years – rides a motorcycle, reads voraciously and even finds time to —–  sunbathe!

And surely our League is lucky to have Les Rivkin advocating enthusiastically for all that we stand for.