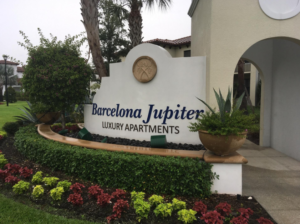 But Jupiter’s first extended whirl with the concept has produced continuing clashes over how to set rents, with town officials maintaining residents have been overpaying by hundreds of dollars a month in some cases. Town officials have calculated overcharges of more than 50 tenants by up to $421 a month over a year ending in May at Barcelona Jupiter apartments along Military Trail. An email from the town’s principal planner David Kemp to building representatives referred to “continuing non-compliance” in September. An Oct. 29 letter from town attorney Tom Baird to the landlord’s attorney defends Jupiter’s position as “legally correct” as well as “practical and logical.”

Apartment owners disagree, noting that a proposed fine of $150,000 was reduced by a magistrate to $11,250 over the summer.

Workforce housing represents an attempt to address one of the most common complaints in Palm Beach County: People on regular working salaries find it increasingly difficult to live near where they work, particularly in the region’s more affluent communities. Home prices and rents have been on a steady march higher in the county, but wage increases have lagged, even with the jobless rate at a rock-bottom low.

In response, local governments have relaxed building limits in certain cases where developers agree to set aside a certain number of units for workforce housing.

To take a recent example, a unit of sugar concern Florida Crystals purchased 30 acres near Florida’s Turnpike west of Lake Worth and announced plans to build 370 “high-end” apartments, including 70 workforce housing units and a pre-school.

Barcelona’s original builders were allowed to nearly double the normal “density” — the number of residential units permitted in a certain space — if they agreed to set aside 75 apartments for at least 50 years for people in certain income levels.

But Jupiter’s case has revealed some bumps in the road.

Even if the town ultimately prevails, Jupiter officials acknowledge regulations do not appear to require either side to notify or directly compensate the people the program was designed to help, tenants.

That would not rule out a voluntary agreement by the landlord or some further action by the town to compensate tenants. But there seems to be no built-in mechanism to reimburse renters if violations are found.

Is anyone concerned about what happens to individual tenants who may have overpaid?

In any case, Jupiter officials took a detailed look at Barcelona’s tenants. Town officials say the landlord has ignored regulations to set rents according to the actual incomes of tenants, and instead charged them at the upper limits of certain broad income categories.

For example, town officials figured the tenant at one unit with an annual income just above $40,000 is paying $1,265 in monthly rent, $421 more than justified.

Another with an annual income of $52,000 is paying $1,515 per month, $403 more than necessary, they said. Building owners disagreed, but Special Magistrate Leonard G. Rubin ruled the “plain language” of a town ordinance supports setting rents by actual income. Olive argued the town overstated the length of stay of tenants and made other miscalculations to arrive at a $150,000 fine. Rubin decided to lower the fine amount but urged the parties to “work together to ensure that the appropriate methodology is utilized” to set rents.

But no quick resolution emerged. If the town is right and the rent is too darn high, one group is left stuck in the middle with little relief in sight: The tenants who were supposed to benefit from workforce housing in the first place.