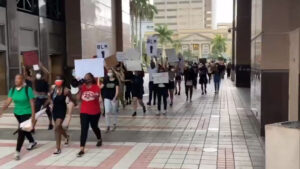 “It’s life or death for the young men we work with. It’s life or death even when we’re pulled over by the police,” said Ricky Aiken, founder of non-profit Inner City Innovators, speaking at the Juneteenth rally at the Palm Beach Courthouse on June 19, 2020. Young League Chair Ashley Cacicedo was invited to bring a team of volunteers to register voters to vote by mail. Speakers urged the protesters to sign up to vote by mail in time for the August state primary and the November 3, 2020 Presidential election. The peaceful Juneteenth demonstration was organized by Black Lives Matter, and included many civic groups, such as Inner City Innovators, Hope Dealer Mentor Program and Tabernacle Missionary Baptist Church. A racially diverse group of two hundred prayed, spoke, listened and marched amidst claps of joy, sorrow and claps of thunder.

The League of Women Voters “stands in solidarity with the Black community,” LWVUS CEO Virginia Kase announced on June 3 : “This week, people from all over this country have exercised their First Amendment rights as they protested the killing of George Floyd and the countless other Black lives that have been taken at the hands of police. We have seen peaceful demonstrators take to the streets demanding change. We have seen people of every race, religion, and ethnic background stand and kneel in solidarity with the Black community with the same message—Black Lives Matter.”