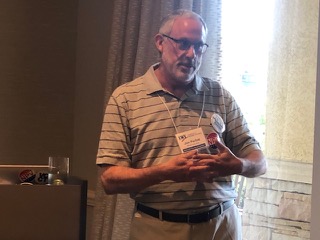 On June 5, Oregon became the fifteenth state to pass National Popular Vote bills in both chambers of the state legislature; the governor is expected to sign the measure into law. NPV supporters in LWVPBC are working to ensure that Florida also will adopt the National Popular Vote Interstate Compact.

“The National Popular Vote Compact is designed to make every vote matter, regardless of where the voter lives, and to make the U.S. President the candidate who gets the most popular votes, just as we appoint every other candidate for public office,” says Jonathan Perloe, addressing the League of Women Voters at the LWVFL state Convention in Naples.

Perloe was instrumental in Connecticut’s adoption of NPV in Spring 2018. Since then three other states have signed on to the compact: New Mexico, Delaware and Colorado, adding up to 189 electoral votes, and with Oregon adding seven more for a total of 196– or 73 percent of the way to 270 electoral votes. The compact goes into effect when enough states sign on to equal 270 or more electoral votes. The measure does not require an amendment to the Constitution. 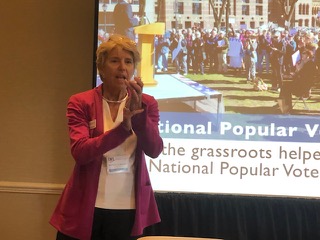 Kathleen Crampton, who spearheads the LWVFL’s NPV team, invited Perloe to speak at the convention, where he explained how Connecticut passed the legislation last year. He credited grassroots efforts of groups like the League of Women Voters for persuading lawmakers to support NPV.

Kathleen is working to pass NPV legislation in Florida. This is the third year that State Representative Joseph Geller and Senator Victor Torres introduced NPV legislation but it didn’t get heard in either chamber. A 2017 poll conducted Florida Atlantic University and commissioned by LWV shows that most Floridians support NPV and Kathleen hopes the state will join the NPV compact by 2024. 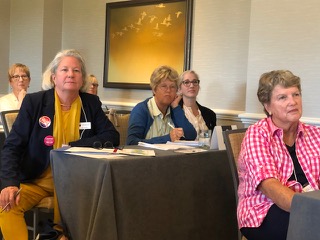