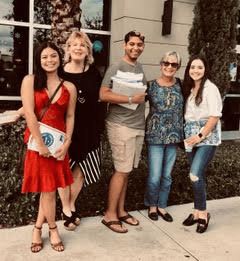 Christene Campbell-Gabor and I had lunch with former interns Faith Maniti, Naya Payne and Dayalis Zamora, who were back in town for Christmas break.  Not surprisingly, they are all majoring in Political Science.  Faith and Dayalis are both currently student senators at the University of Florida and NYU, respectively.  Naya was elected senator in his first term as a freshman at the University of South Florida – St. Petersburg.  Having left student government, Naya heads up a campus extension chapter of the St. Pete League, as well three other groups, including Civility and Community, which focuses on fostering future leaders who can work together.

It was amusing to watch Dayalis try to identify with the experiences of Faith and Naya in Florida, both of whose campuses represent the red/blue political divide in the state.  Of course, NYU and its surroundings, are “bright blue.”  Their student senate studied and eventually opted to divest monies from a company that also provides, according to The NY Times, substandard food for prisons.  This was a painful decision because it also involved some campus personnel losing their jobs, but it was a lesson in real-world issues.

The University of Florida student senate, Faith reports, is in the process of trying to impeach the president for having used student funds to invite Donald Trump, Jr to speak on campus.  This story has also appeared in the press nationally.  All three expressed surprise and disgust at how dirty politics are, even at the university level; it’s been quite an education for them.  The other lesson all three have learned is that sadly, “It’s not what you know, but WHO you know” and they are working on their networking skills.

Christene brought copies of the new MINI CROSSWORD – Series 4 on Notable Women – and they were thrilled to see so much of the research they did actually in print.  She also shared some of the Civics Education committee’s “Critical Thinking” exercises with them, which they plan to take back to their colleges.

The three are becoming world travelers, with Faith spending time in India and Nepal this summer on an internship, while Naya went to China last year and Dayalis heads to Paris in January for a semester at NYU-Paris.  We are so happy these wonderful young people made time to meet with us.  We definitely plan to keep our eye on them!