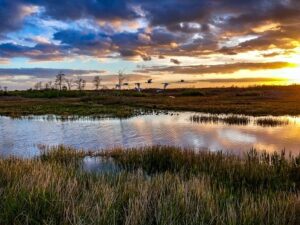 The Comprehensive Everglades Restoration Plan (CERP), approved by Congress in the year 2000, included 68 components to be completed in 20 to 30 years at a cost of $7.8 billion. The plan includes constructing reservoirs, removing levees, filling canals and building necessary structures. The aim was to restore something like the natural flow of water in what’s left of the Everglades while assuring water supply and flood protection for about a third of Floridians. Two decades later, the state and federal governments have spent $6.2 billion and completed just one project. Replumbing the Everglades is now expected to continue most of this century and cost more than $16 billion.  CERP is the largest environmental restoration project ever – covering an area the size of New Jersey.

Though named the Comprehensive Everglades Restoration Plan, the project covered only part of the Everglades, and wasn’t even close to “comprehensive.” Nor was it a “restoration” in the sense of returning the Glades to its original state.  Half the Everglades is long gone to development, flood protection and farming. “Restoring” what was left meant using engineering and structures to restore function. The project has experienced many delays due to changing circumstances. Scientists now understand more about the eco-system geology and hydrology, atmospheric trends, saltwater intrusion and the pace of sea-level rise. The condition of the Lake Okeechobee dike and high-rain events, with resulting algal blooms, have complicated efforts. We now know that the region is not able to support as much underground water storage as originally envisioned.

Major problem: water meant to hydrate Everglades National Park and Florida Bay is escaping underground to the park’s east. A possible solution (years away) includes constructing a giant underground wall to retain the water. Other issues: Invasive species and human population are growing. The sea is rising faster than anticipated. Original planning was during a cold/dry cycle. We’re now in a 30 to 40 year warm/wet phase that will leave as much as 50% more runoff a year.

Overall, project advocates say that water quality in the Everglades is improving, but maintaining the momentum assumes funding. Planners want $7.4 billion this decade. Since the year 2000, the state and federal governments have spent $21 billion on Everglades projects – about $1,000 for every Floridian.

A few of the many complications include:

A full report is available on the Corps of Engineers Jacksonville District website at: www.saj.usace.army.mil/CERP-Report-to-Congress