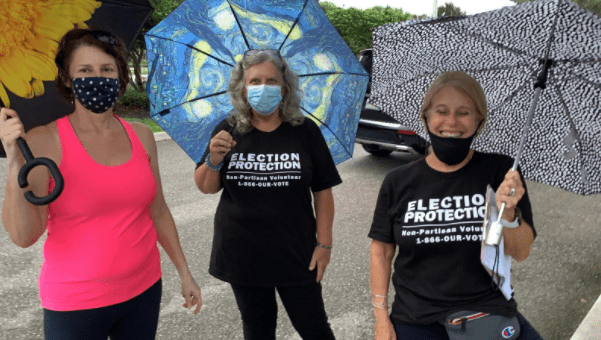 If you voted in person during Early Voting or on Election day, you might have seen our Election Protection poll monitors offering assistance to voters. The League of Women Voters of Palm Beach County (LWVPBC) was Palm Beach County’s lead for the national Election Protection program, in coalition with the ACLU and the National Council of Jewish Women. The program, which is coordinated by Common Cause, the Lawyers’ Committee for Civil Rights under the Law, and State Voices, works to ensure that every eligible voter can exercise his or her right to vote. Central to the Election Protection program is a National Voting Hotline (866-OUR-VOTE).

Staffed by trained lawyers, the hotline provides service in 26 languages and is available 24 hours to assist with voting needs. During Early Voting and on Election Day, the hotline received 1521 calls from Palm Beach County residents. Our Election Protection team was co-led by Linda Geller-Schwartz and Kate Renchin. They coordinated a WhatsApp Chat group, which was used every day during Early Voting and on Election Day. This platform allowed the monitors to communicate and report problems to the leads in real-time. Issues were then relayed to the hotline or the SOE to resolve.

Our 90 Election Protection volunteers acted either as in-person poll monitors or mobile monitors, who covered the county from Jupiter to Boca Raton to Belle Glade. Like partisan groups, nonpartisan organizations have to stay outside the 150’ no-solicitation zone, which sometimes makes it difficult to monitor the situation and speak with voters. However, the volunteers reported many problems with polling places, including signage, accessibility issues, voter intimidation, and mobile vans used as drop-offs for mail ballots.

The monitors also provided information and direct help to voters who had a variety of questions. Sometimes the voter was told to call the hotline. This election cycle, 70% of the hotline calls were about voter education, issues related to vote-by-mail ballots, registration, provisional ballots. About 60 calls were reporting in-person intimidation and a few cases of online intimidation. On Election Day, monitors acted as a rapid response group. We sent them to places where we heard there were problems brewing. For example, Century Village in West Palm Beach had over 100 senior citizens stood in line for 90 minutes or more. Also, at the Acreage boisterous electioneering, had gotten out of hand.

Unfortunately, this year, Election Protection volunteers had to spend more time reporting electioneering that bordered on intimidation (e.g., crossing over the 150’ mark; harassing voters with blaring music or recorded speeches; forcing literature on voters, screaming at them) than on helping voters with information. Sometimes Election Protection workers ended up diffusing arguments between the two sides, which was not
our job. Frequently we had to get the poll deputy-involved or even call the sheriff. We continued to focus on our goal: making sure the voter didn’t leave the polling place because of fear or inaccessibility. It was hard work, but we made a
difference. One of our volunteers Kate said our team was ‘spreading peace.’