Disposable City: Miami’s Future on the Shores of Climate Catastrophe 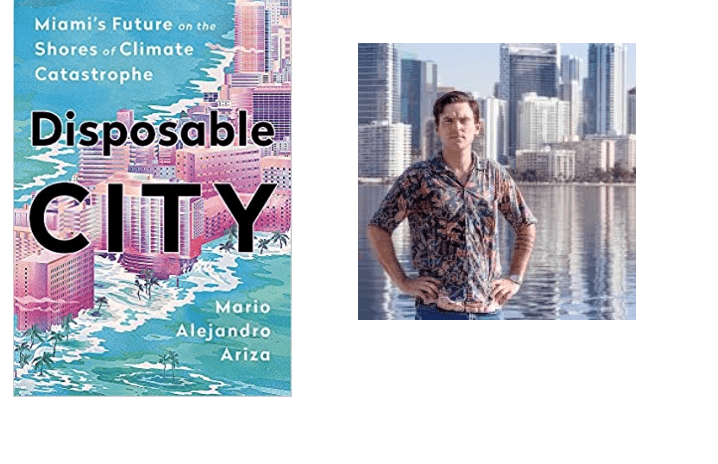 “When the waters come, please know you had kin who fought like hell to keep them from your door.”   The book’s “Dedication” reveals the author’s passion for fighting against climate change and why sea level rise will likely put Miami underwater by the end of this century.

Mario was prompted to write Disposable City when he was teaching English in the Hunan Province of China during the summer of 2015.  When he stepped outside, the smog was so thick that he couldn’t see the other side of the street. The smog lasted for days and he used an N-95 mask to breathe. He realized this was more than pollution – it was climate change. After moving back to Miami, he learned that developers, builders and realtors were treating Miami as if it were a patient suffering from a terminal disease. Miami’s fate matters little to investors who intend to pull out when the timing is right and the profits are the highest.

As Los Angeles and San Francisco burn with wildfires, as Phoenix broils, as Jakarta sinks into the sea, human-driven climate change presents Miami with a grave threat – porous local geology means there is no stopping rising water.  The advancing Atlantic Ocean has Miami pinned against the protected and low-lying Everglades. Miami sprawls across a limestone plateau. You could build a sea wall to heaven and the rising water would still gurgle up from below the bottom.

Decades have been wasted ignoring the warning signs, and every day wasted increases the probability that Miami cannot be saved from drowning. The only high ground, the Atlantic Coastal Ridge, has become contested territory. Historically, the white population coveted waterside living and moved minorities to places like Little Haiti and Liberty City, which are both on the ridge that now glimmers in the eyes of opportunistic developers.

The economic effects of the changing climate will hit hard even before the city drowns. The city of Miami has an extremely busy cargo air terminal and cruise ship terminal. There’s a thriving “real estate sector” that caters to international investors looking for luxury homes. Tourism is big business, which means the service sector is the main driver of the economy. Flood insurance is expected to become far more expensive. Increasing temperatures, stronger hurricanes and sky-rocketing insurance threaten all aspects of the local economy.

People are already feeling the negative effects of climate change, which include an increase in allergic diseases. Lower-income people, especially seniors, are more vulnerable to pulmonary issues and heart disease.

What can we as individuals do to protect our communities?

Educate yourself. Understand climate change generally and personally. Know how it will affect your pocketbook.

Mario Ariza grew up in Santo Domingo (the Dominican Republic) and Miami, where he currently lives. He is featured in Sinking Cities, a PBS documentary series that examines how coastal cities are dealing with the threat of climate change.